Old age characters done in university productions are often problematic, particularly in naturalistic plays. Old age characters done in smaller black box theatres at universities present an even greater problem. Often, between the theatricality of the lighting and the proximity of the audience, the makeup designer has little leeway when it comes to disguising the age of eighteen-year-old actors playing older characters. Three-dimensional make-up done with latex prosthetics or with liquid latex is extremely time consuming. Many directors, costume designers, and actors do not believe the 2 hours plus time spent in the make-up chair is the best use of the actor’s pre-show time.

During my sabbatical, my goal was to develop a three-dimensional technique in order to age young actors which can be applied in 30 minutes prior to the show, will last for the two-hour duration of a performance, and is reasonably priced, and, therefore affordable for smaller, poorer, departments.

Christien Tinsley, a special effects make-up artist and owner of Tinsley Studio and Tinsley Transfers Inc. developed the Prosthetic Transfer Process. The process facilitates the application of three-dimensional prosthetics by creating the prosthetics as temporary three-dimensional tattoos. You can find Tinsley’s bio on the Stan Winston School of Character Arts Website.

Juli Hapney, a special effects make-up artist whose specialty is gore, formerly based in Los Angeles California but currently residing in Las Vegas, taught me the process by which three dimensional tattoos are created. Originally, I planned to visit her studio in person to learn the process, but because of the problems associated with the Covid-19 Pandemic, my contact with her was limited to online long-distance guidance. I have used the Pros-Aide Prosthetic process to create old-age prosthetics which can be applied either as temporary tattoos or without the waterslide tattoo paper as prosthetics. The Pros-Aide prosthetic making process is time and labor intensive, but the Pros-Aide prosthetics are extremely versatile, fast and easy to apply during the run of a production. The following report is a step by step account of the process.

If you have a hard time following the directions on the following pages, a quick Google search for the Pros-Aide transfer making process will reveal some very good tutorials on You-Tube. Also, you should be aware before you start, this part of the process is labor intensive. Working nonstop, it takes about a day to sculpt the prosthetic and to make the mold. It takes about another day to prepare the Pros-Aide cream, prepare the mold, apply the Pros-Aide to the mold, and then to put it into and take it out of a freezer several times. It then takes between 2 and 4 days to dehydrate the prosthetic. The value of front loading the major portion of the work is manifested in the ease with which the prosthetic can be applied, and the confidence the actor will have while wearing the appliance.

The collection of old age portraits for a reference morgue is recommended.

How to Make Temporary Pros-Aide Tattoo Prosthetics and Old Age

If you have a hard time following the directions on the following pages, a quick Google search for the Pros-Aide transfer making process will reveal some very good tutorials on You-Tube. Also, you should be aware before you start, this part of the process is labor intensive. Working nonstop, it takes about a day to sculpt the prosthetic and to make the mold. It takes about another day to prepare the Pros-Aide cream, prepare the mold, apply the Pros-Aide to the mold, and then to put it into and take it out of a freezer several times. It then takes between 2 and 4 days to dehydrate the prosthetic. The value of front loading the major portion of the work is manifested in the ease with which the prosthetic can be applied, and the confidence the actor will have while wearing the appliance.

After collecting supplies and deciding on an age for your character, you will need to obtain a series of photographs of the actor for which you building the prosthetics. My son, Mike, graciously allowed me to use his face, since it wasn’t safe to use another student as a model during the pandemic, which is when I started this learning process.

I took three photographs of Mike’s face, a full-face frontal with the actor’s hair pulled out of his face, left profile, and a right profile. When you take your photographs, do not make the mistake I made of getting so close that the face fills the screen, because your photograph will be a wee bit skewed. Do take it close enough to get a good life-sized image, but not so close that your photograph has a fish-eye effect.

The overall measurements, (such as length of face from hairline to chin,) are not as important as the small measurements. But they will tell you how skewed your angle is on your photograph. For example, if you look at the photograph of the full-frontal face below, (which is the photograph I used,) you may notice that, since I took the photograph fairly close, the nose is a little larger proportionately that it actually is on Mike’s face.

I took the photographs too close so they are a little skewed but I used them anyway. Also, it is better if the photographs are not taken at an angle. As you can see from my examples, the right profile is a better shot than the left. I also experimented, removing part of the background in order to better see the profile. But I quickly decided that wasn’t worth the effort.

I tend to divide the face in this manner: forehead, eleven, left eye, right eye, left nasolabial fold, right nasolabial fold, left jowl, right jowl, upper lip wrinkles, and lower lip wrinkles. Work each section on its own piece of glass; if you need the security of seeing the makeup as a whole, draw your ideas onto the face before you begin sculpting.

The following is a numbered pictorial guide, designed to take you step by step through the process. Before you begin, gather your supplies, find a good place to work, and be aware that the process will take several days. For your effort, you will be rewarded with a three-dimensional character make-up that should only take about 30 minutes to apply, but will stay put and look terrific for the duration of a two to three-hour performance.

The photograph above is of a leak! You can see the silicon leaking underneath the clay retaining wall at the top of this forehead pour. It didn’t become a mess because I placed the piece inside a shallow cardboard box before I poured the mold. And fortunately, the breach in the clay retaining wall was so small that I didn’t waste a lot of the silicon. But it would be better to avoid the leaks by anchoring the clay wall firmly to the glass plate.

What worked about the first application attempt

What did not work during the first application 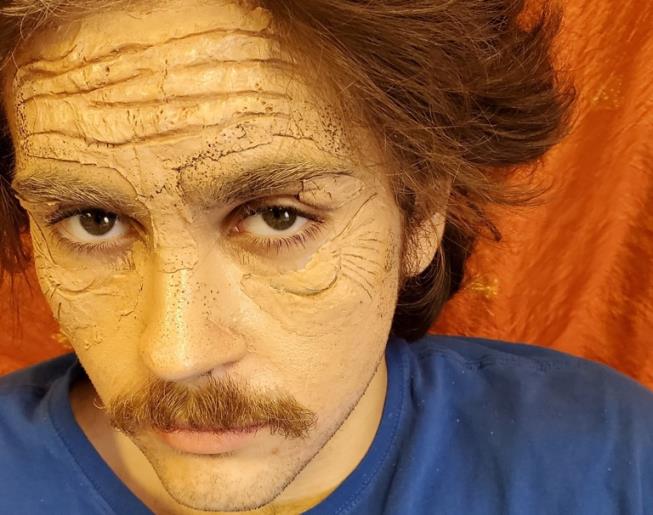 This application is better but still not perfect.

What I learned from this application

You will do yourself a huge favor if you have a razor handy to get rid of unwanted hair. Mike said he shaved, but he is so hairy that we still ran into problems with stubble on his cheeks, AND the hair under his eyebrows caused problems during the application of under eyebrow sags. I couldn’t get the jowls to stick because of the stubble on his jaw.

The third application is a charm

The photographs below are from the third application I did using the second set of prosthetics. This application was very successful, although I only did the top half of Mike’s face. 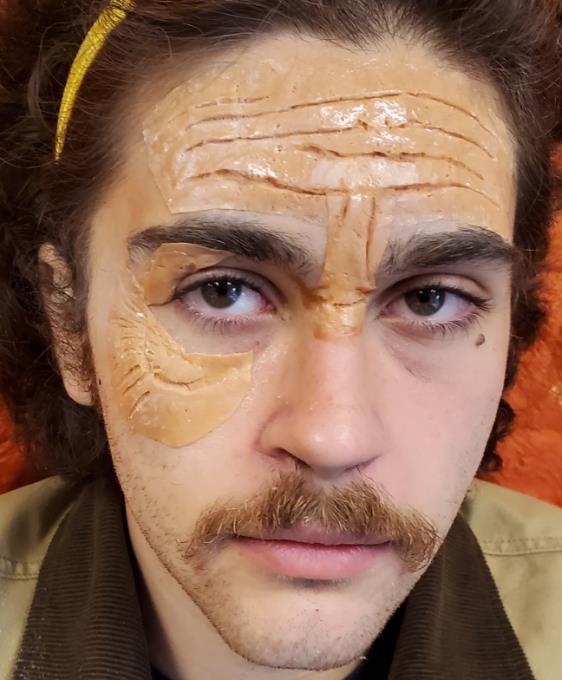 This application is by far the most successful. The prosthetic edges all stuck to the waterslide paper and removing the acetate was fairly easy. For this application, I left the under-eyebrow sag connected to the under-eye pouch and laugh lines. Mike’s suggestion was that they be applied separately, because he found that application a bit uncomfortable. I did place the under eye pouch a little low because he kept flinching. The eyebrow eleven lines needed some shadow because they were too shallow, so I extended the shadow into the corner of the eye. Finally, if you are still having a hard time with edges that flip up, brush the edges with a little Pros-Aide cream.

Tips for application: have a razor handy! I shaved the hair above, beside and between Mike’s eyebrows so the prosthetics would stick to the skin. And have some 99 percent alcohol and applicators close by in case your acetate wants to stick to the prosthetic; you can coax it off with a Q-tip and alcohol. Have a brush and Pros-Aide cream ready to smooth out edges if necessary.

Because Mike had been so generous with his time already, for this application I told him we would just do one side of his face as quickly as possible. But I didn’t rush. I held the prosthetics up to his face to see if they fit into the allotted spot, made sure the spot was hairless, trimmed up the under-eye sag to fit under the eyebrow and wiped the skin with a prep pad. After the prosthetics had been applied to his face, I added a base, a little highlight and shadow, some color and stipple, and I couldn’t resist adding the subtle gray streaks to hair and beard. I didn’t do much, because I had promised him that it wouldn’t take very long. We spent about 25 minutes on his face total, including the make-up added after the prosthetics were added to his face. I did not apply the laugh lines and under-eyebrow sag to the left side of his face. It took about 2 minutes to take it all off. The following photographs were taken at the end of the session using my cell phone. 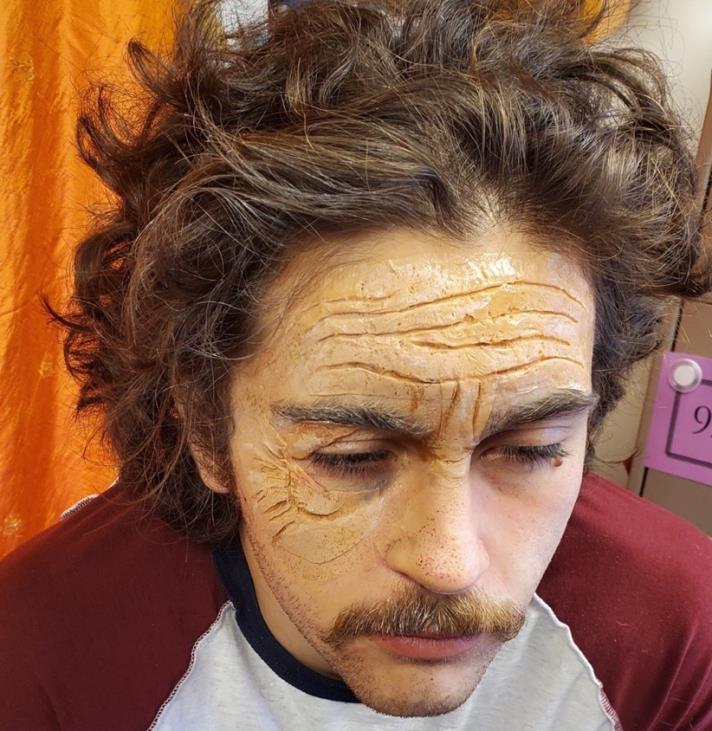 The above photo is at about 8 inches away. 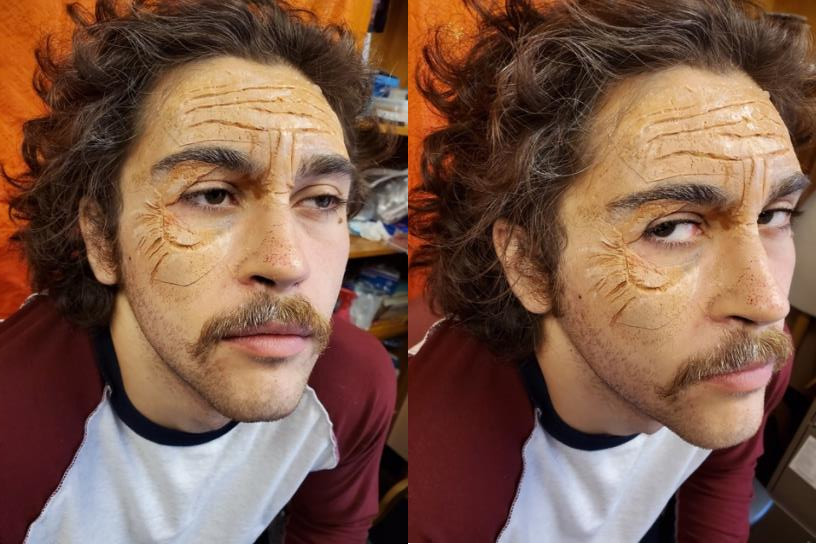 The above two photos are taken about 8 inches away. 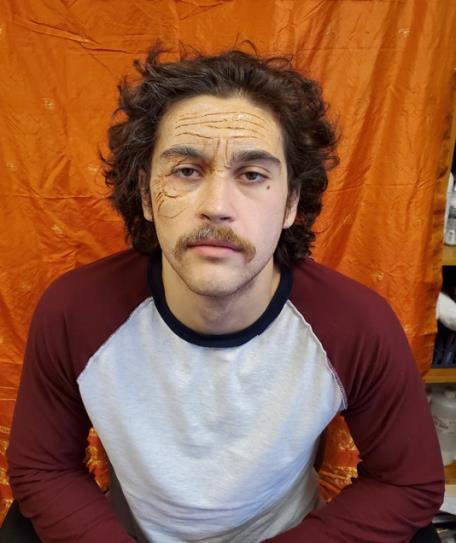 The above photo was taken at approximately 2 feet.

Remove the Pros-Aide prosthetic with Telesis water-proof make-up remover, DC 244 or 245, or with isopropyl myristate. (I used Telesis to remove this piece.)

The Pros-Aide tattoos were built for Furman University’s Production of Do You Feel Anger by Mara Nelson-Greenberg, directed by Margaret Rose Caterisano. The photographs are of William Bickerstaff, who plays Rafalgore. 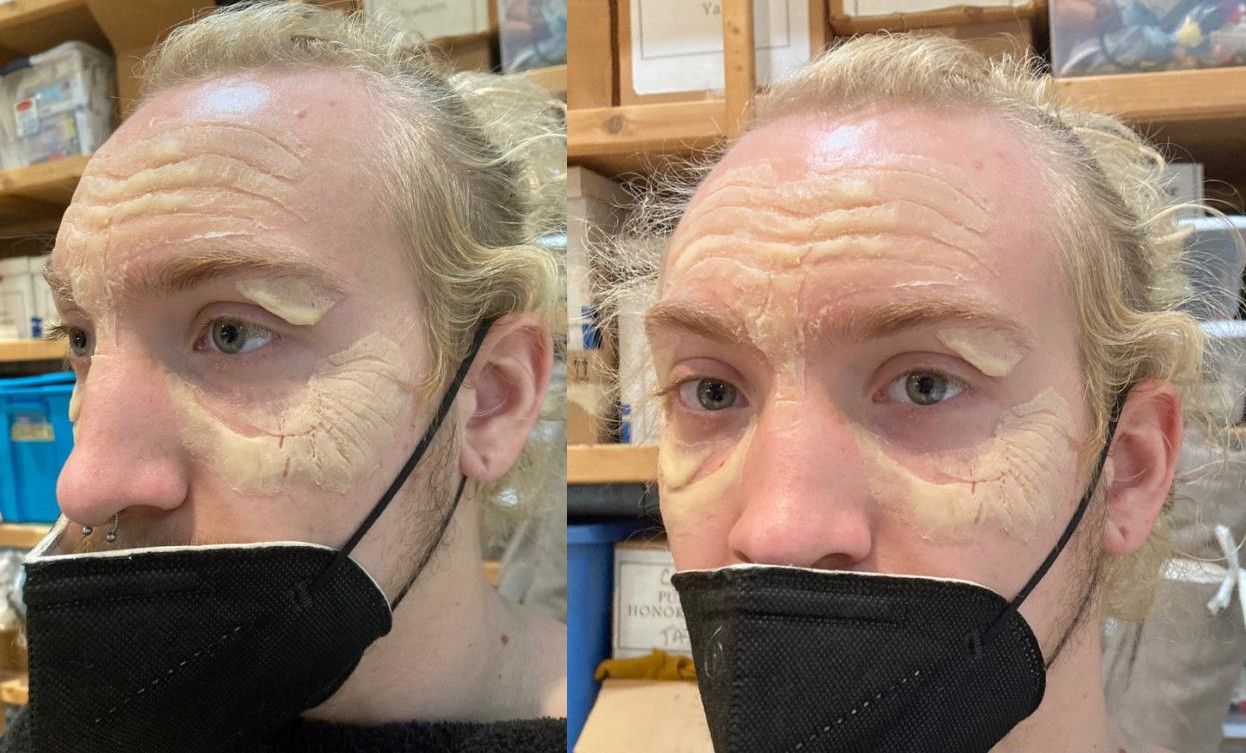 The photographs above are from the first technical rehearsal. The prosthetics went on as planned. This process took under 15 minutes. William then just powdered and applied his base. The prosthetics looked great in the costume shop, but the colors of the lights were so saturated that we felt that shadow needed to be applied to the prosthetics prior to application for the rest of the rehearsals and for the performances.

The following photographs are of the application of a pre-painted temporary tattoo. Andra Enache, the wardrobe crew head for the production, applied the pre-painted prosthetics. Ori McMullen, a wardrobe crew member who was in charge of greying hair in the production, would paint William’s hair. Because there was uncertainty over whether or not the cast would be permitted to perform without masks, and because masks were still mandatory backstage, no prosthetics were built for the lower portion of William’s face. A little Pros-Aide was stippled onto his nose for added texture there and Ori added hair white to his beard. 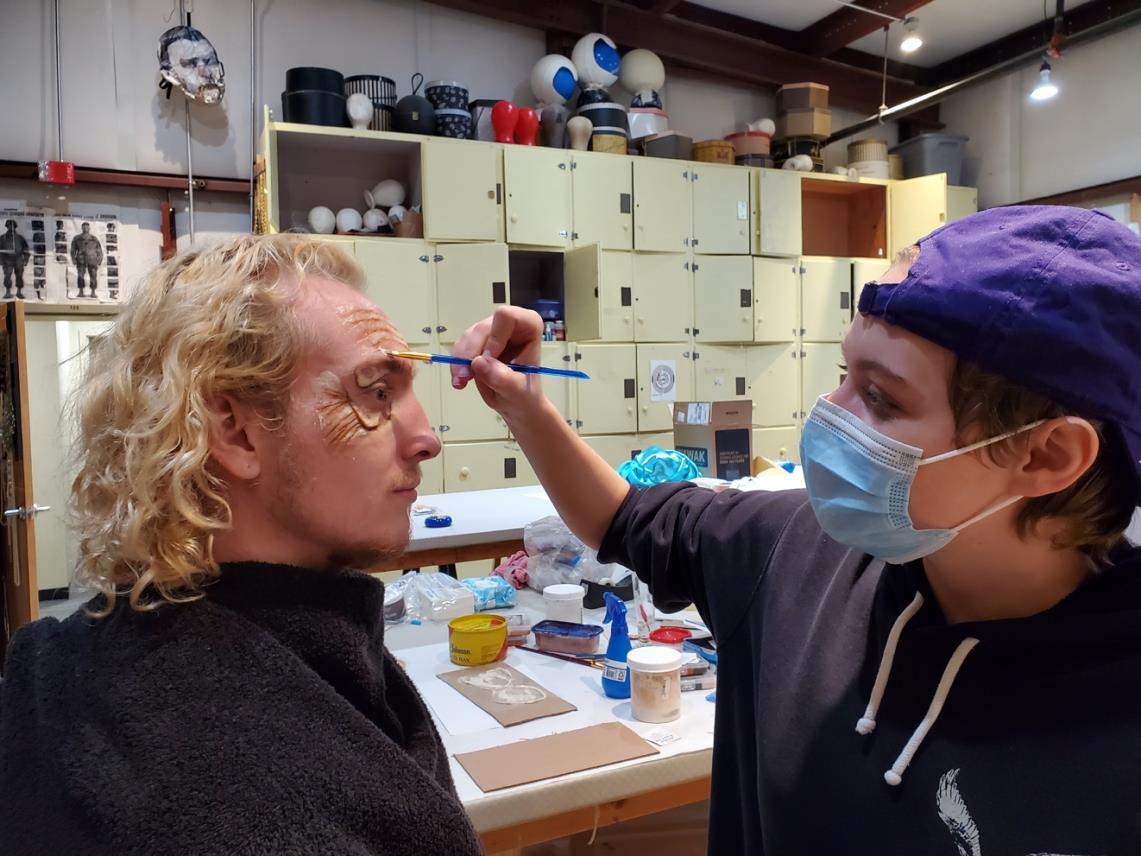 Andra applys the tattoos and a line of Pros-Aide cream to an unsightly edge. 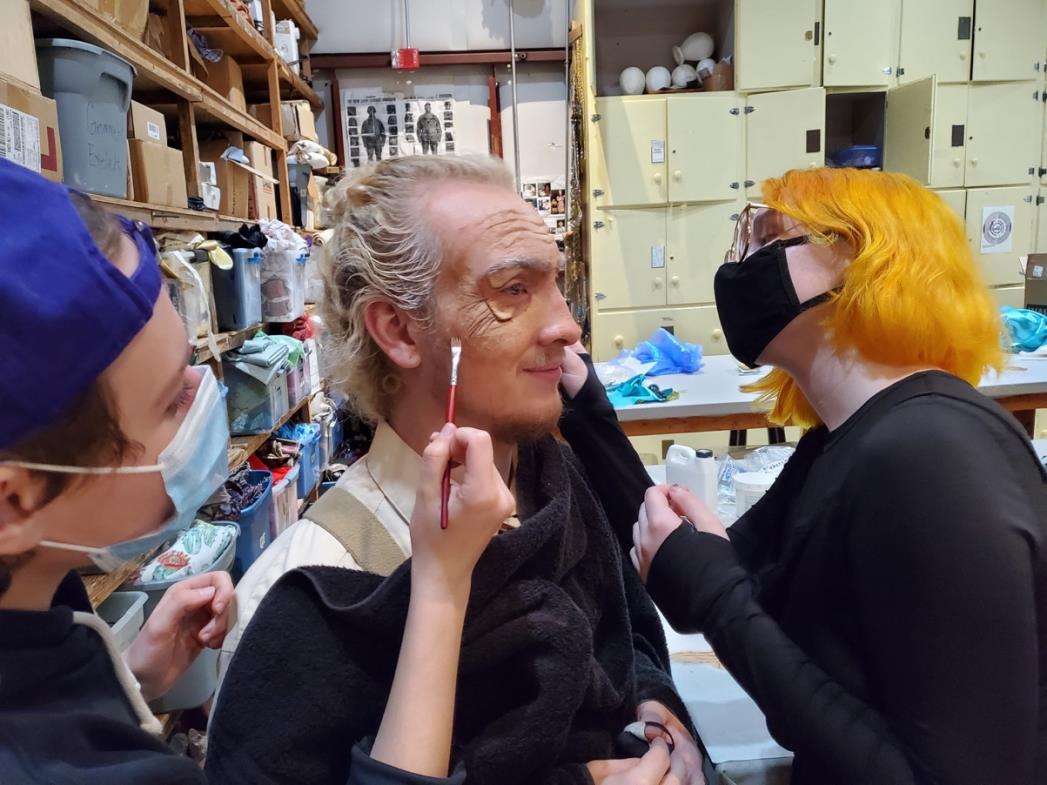 While Ori works on William’s hair, Andra adds shadow to the hollows at his temples and cheeks. 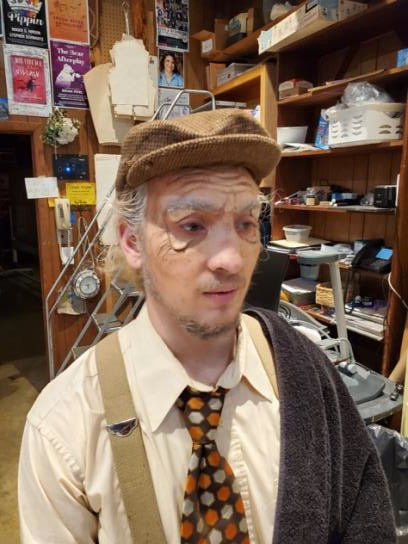 William in the shop before the show 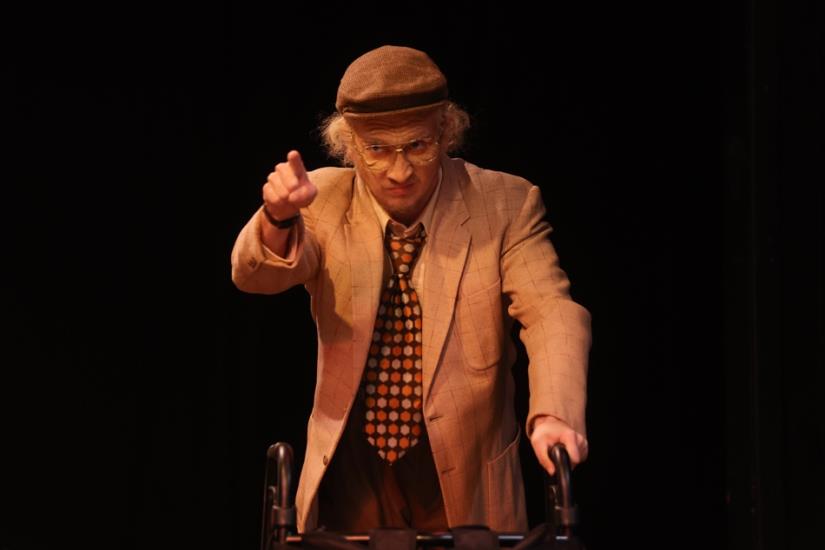 William onstage during the show. 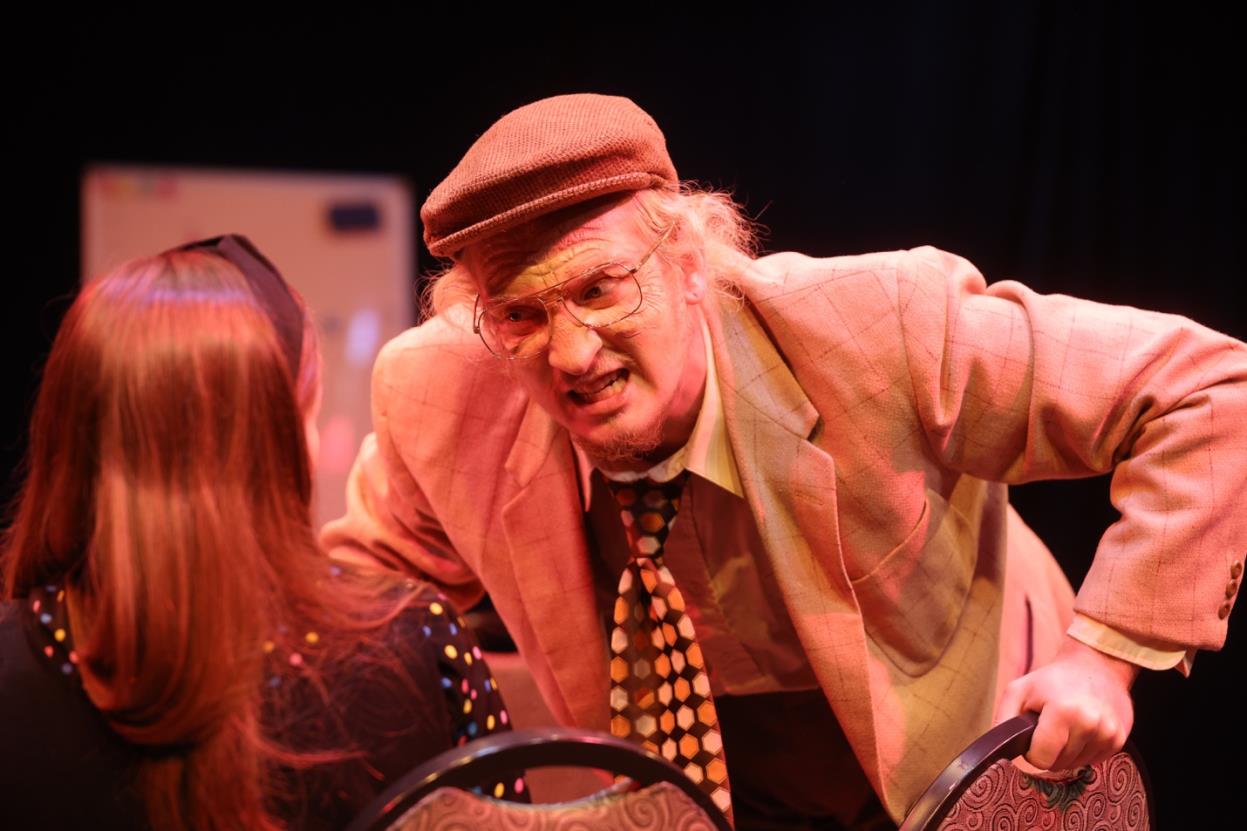 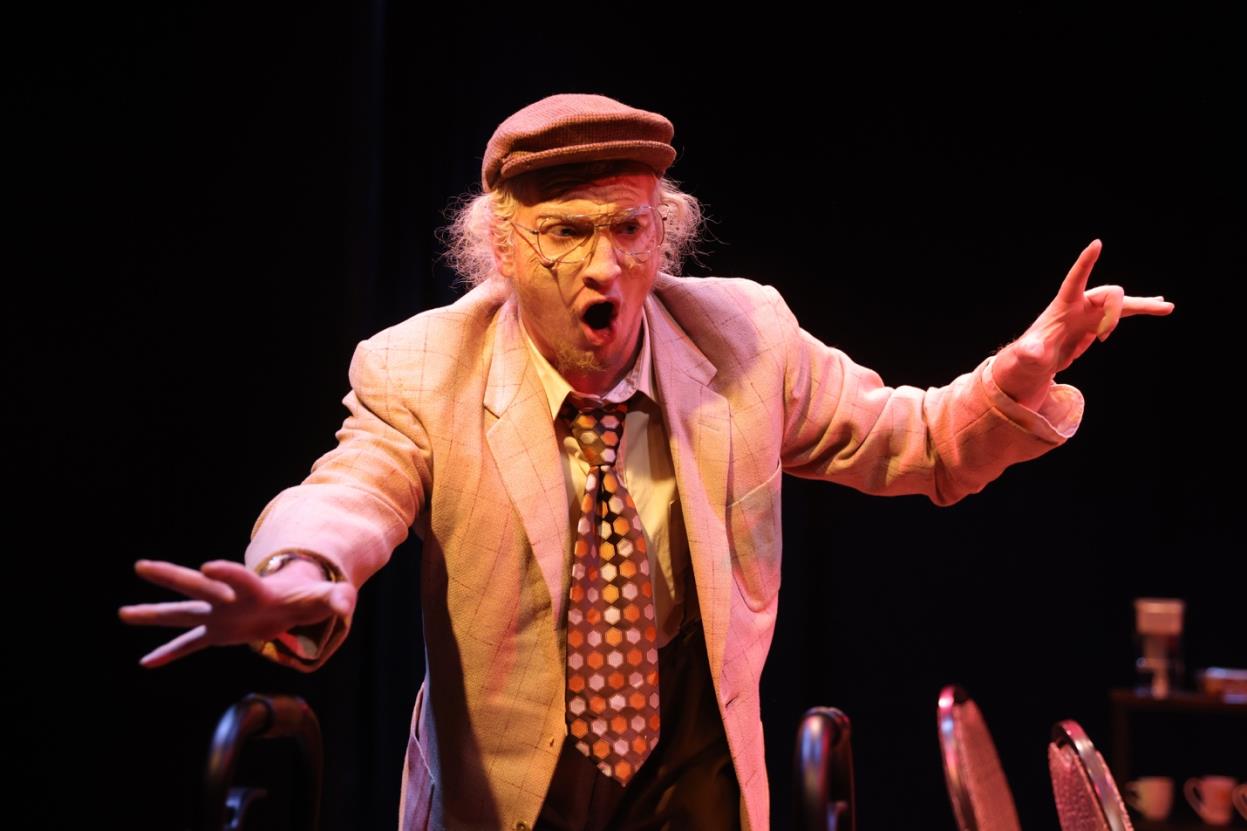 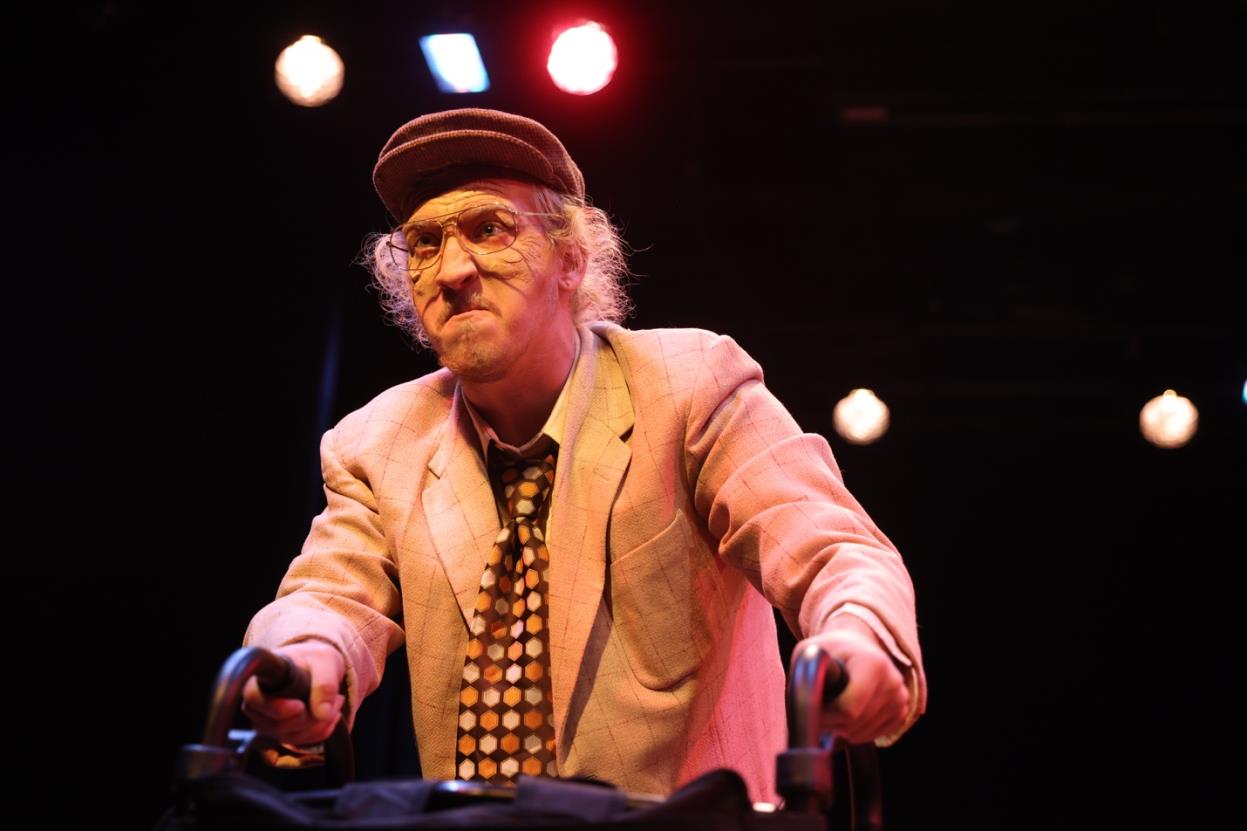 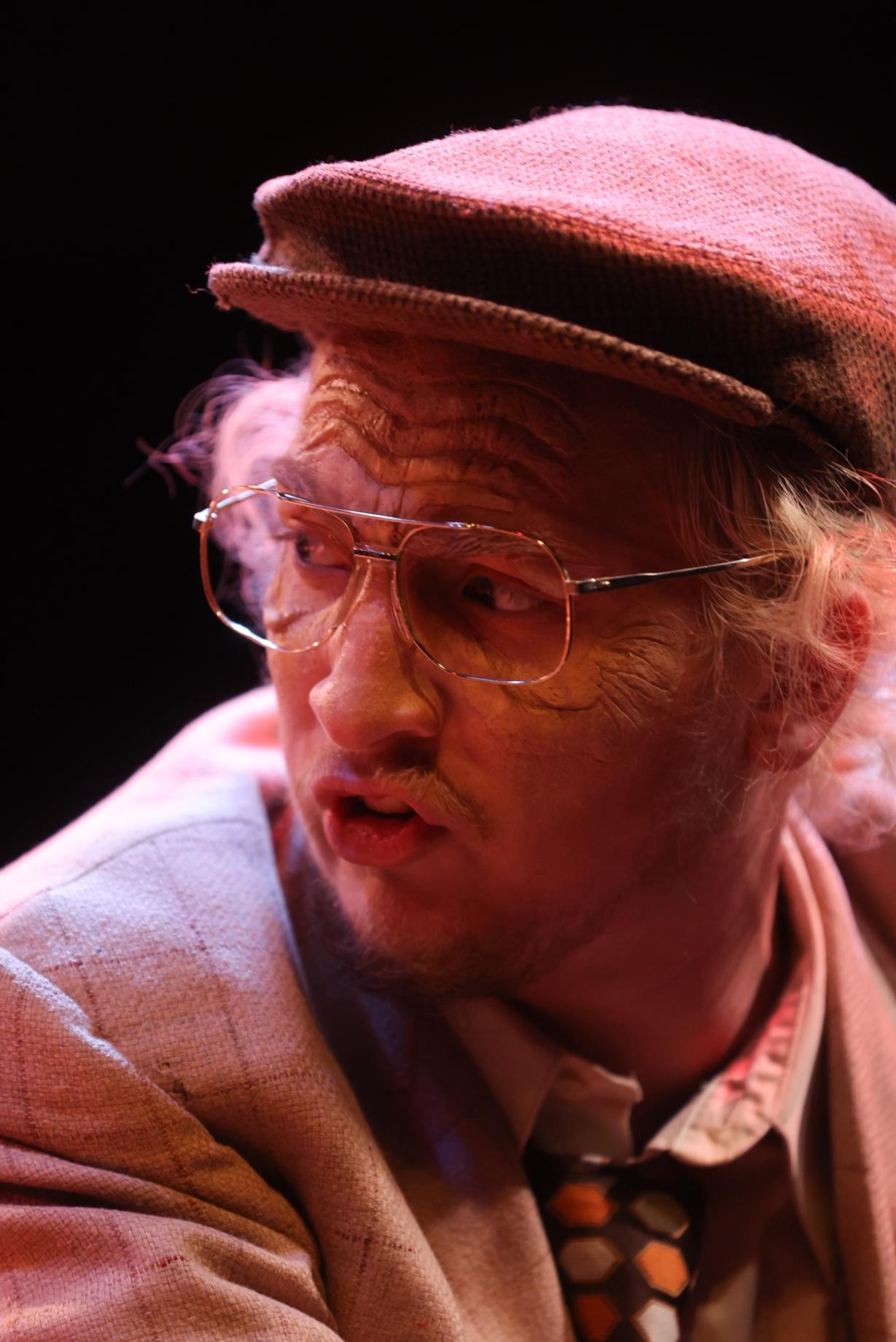 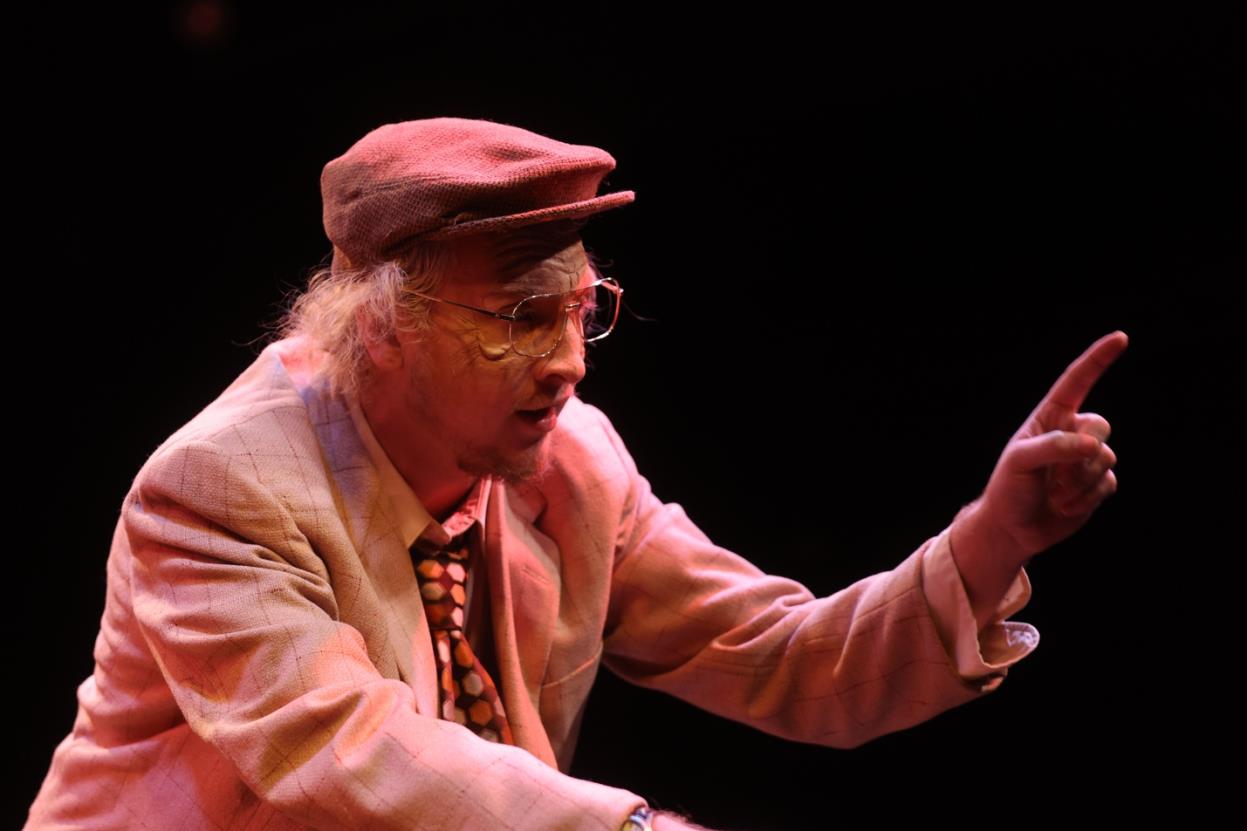 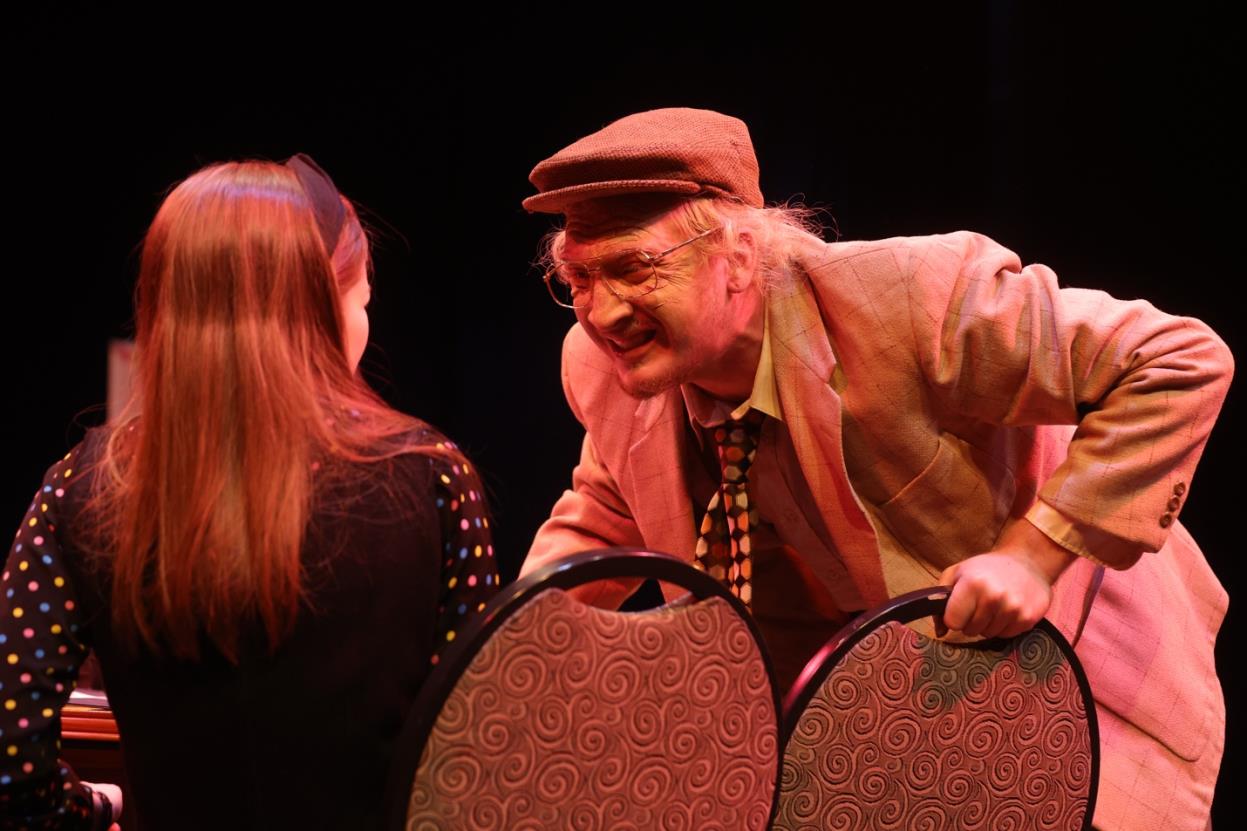 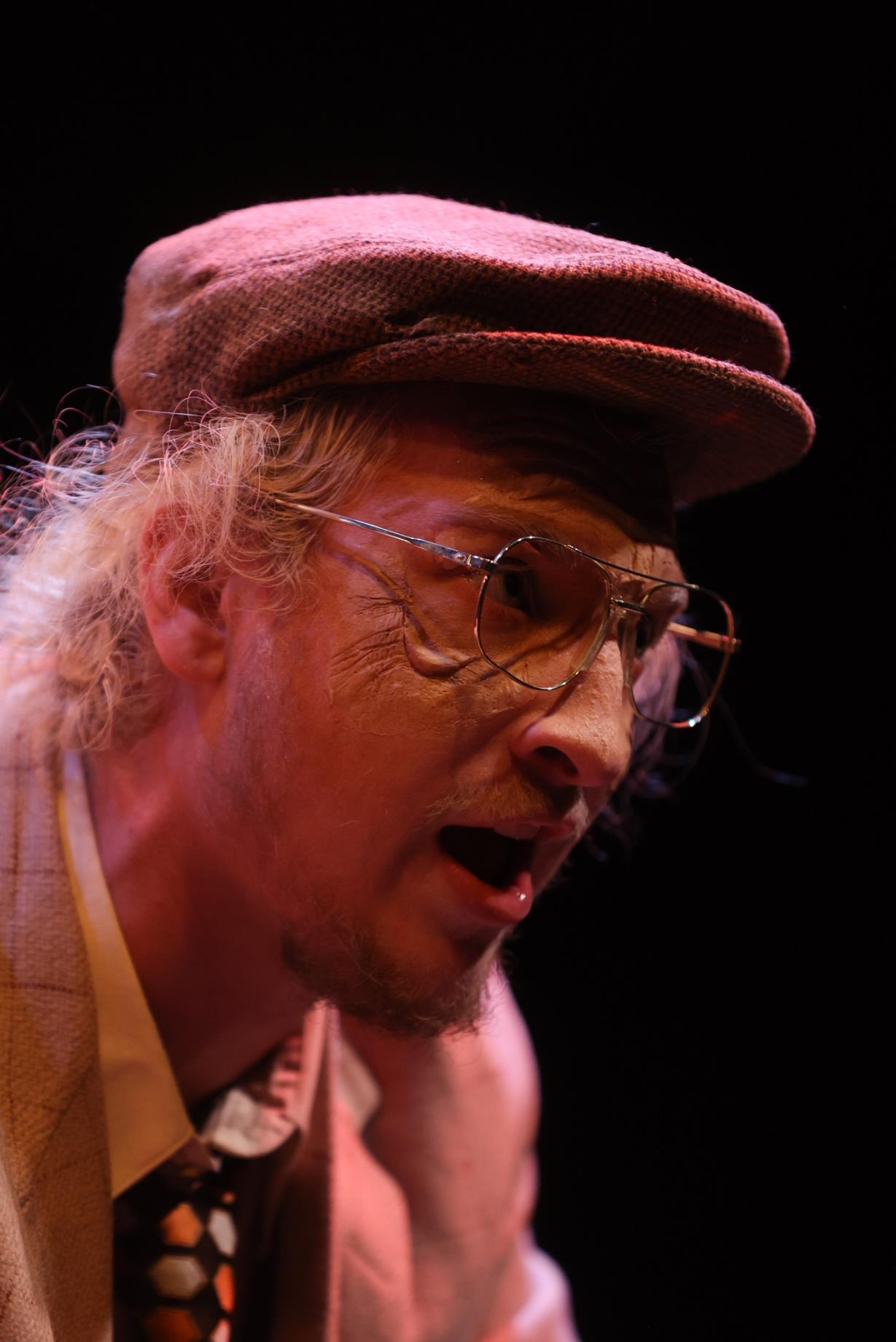